Nothing Happens has won the 11th Fest Anča International Animation Festival. “The film by Danish duo Uri and Michelle Kranot left a deep impression on us – we were entranced by the atmosphere and hypnotizing pace. The deep experience of something happening is pervasive,” said the panel composed of German TV and Film consultant Agnès Bizzaro, British filmmaker Peter Millard, and film theoretician Michał Bobrowski from Poland. The Anča Award won a trophy designed by ALLT STUDIO as well as EUR 800.

With VR technology we can actually become part of a film. Nothing Happens has two versions: traditional 2D animation and VR experience, with one complementing the other – and Fest Anča screened both versions. “In the first version we see people observing, while in the VR version we are in the very place being observed. The filmmakers play with the viewers: you can watch and be watched,” programme director Maroš Brojo explains. The characters wear clothes that evoke the 1930s – 1950s period, yet the story is time- and place-fluid. 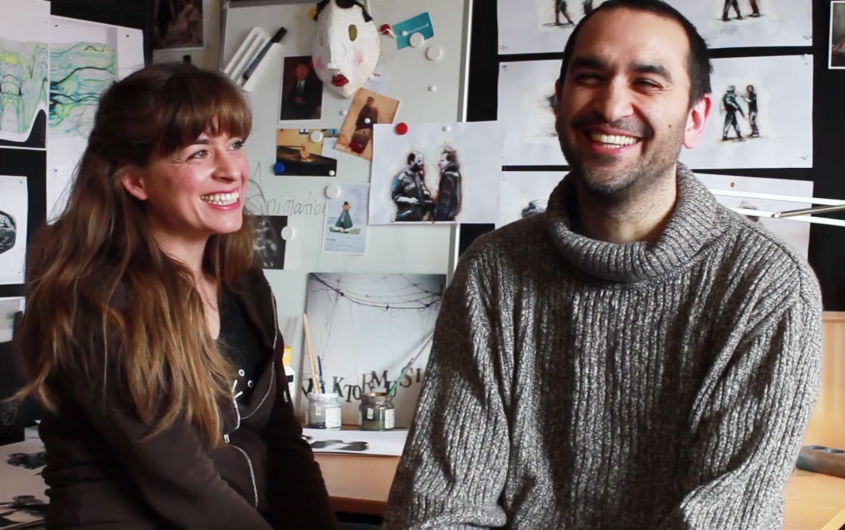 The Anča Award committee awarded the Anča Student Award and EUR 400 to Austrian Alexander Gratzer for Animateur. They particularly appreciated that “a little animation still successfully carries the film with perfect timing and playful use of expectations.”

The music video committee (Slovak cultural manager Michaela Kučová, Spanish musician Jordi Baldó, and Danish game and VR developer Milan Grajetzki) awarded the Anča Music Video Award and EUR 400 to Finn Sanni Lahtinen for w / o, which was created for the electropop group FINKEL. “The video captures you at first viewing – it pulls you in and spits you out at the end. The visuals reflect the music with very organic and dynamic flow. The rhythm, colours and animation take you on a thrilling emotional journey,“ said the jury members.

The winner of the Anča Kids’ Award and recipient of EUR 400 was chosen by kids: Birdlime by Canadian director Evan DeRushie.

Ivana Šebestová won the Anča Slovak Award and EUR 1000 for Yellow. The committee appreciated “the use of colour and light to communicate a story of dedication and passion in conquering fear.” This year’s committee comprised Bulgarian-Canadian director Theodore Ushev, Slovak animator Marián Villaris, and British storyboard artist David Bunting. The Anča Slovak Award is supported by the Slovak Literary Fund.

“Fest Anča aims to raise awareness of animation as an autonomous art form, to bring quality and fun, and to promote the Slovak film and videogame industry,” observes Maroš. “Game Days – the accompanying event for video game designers, developers and enthusiasts – is an important part of the festival.” The  Game Days Pitching Session main prize was won by Blood Will Be Spilled by Double Quote Studios for an atypical approach to the time-proven theme of Wild West and good artistic presentation. The Game Jam competition (fast theme-based game creation) was won by Katarína Geffertová, Jakub Moravec and Vlado Líška with Lost Voice, a dystopia adventure about the loss of voice in a totalitarian state. Missing us already? You can check out all the Fest Anča 2018 winning films at Pohoda Festival in Trenčín from July 5 to July 7. Thank you – and we look forward to seeing you next year with the cream of the crop of animated film and videogames!